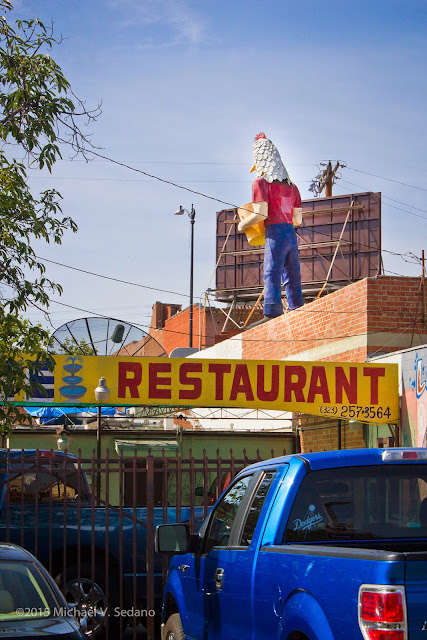 Then one day, Chicken Boy disappeared from Broadway. Que plus ça change and all that, but this icon of a fried chicken restaurant above Los Angeles’ most expensive commercial real estate locus stood as a constant reminder back in the 1970s to a Chicano grad student juggling the weighty issues of no money, ample research, and a recalcitrant dissertation, to take life with a smile.

Setting renders moot standard delivery issues. The constant struggle for personalization through eye contact occurs whether on stage or in the garden. Eyes glued to a tiny telephone screen or manuscript denies eye contact, wearing shades against the brilliant day likewise shuts the window to the soul. Holding the manuscript affects the nature of gestures available. Memorization always frees the performer to use one’s entire technology of the body to create memorably dynamic experiences for grateful audiences.

Projection and volume inadequacies, ordinarily a plein aire hazard, are not in evidence today. The casual outdoor setting encourages the basking audience to interaction, “louder!” or “Say that again?” Karineh Mahdessian greets me as I maneuver for a better angle as she begins her reading, “Hey, Michael, how you doing?” A former speech coach urges one reader to go from memory in lieu of being bound to the text, a useful practice because the words are already in the writer’s mouth and memory. Besides, only the poet knows if a line changes or something drops out.

Karen Anzoategui and Amanda Yates Garcia elect the open shade under the mora tree (under the mor, under the a, under the mora tree). This encourages a manual setting of the camera to avoid exposure variance. When white paper catches and reflects light into its sensor, a camera wants to close the aperture producing underexposed, dark, faces and good values on bright spots.

In full light, automatic exposure using the camera’s partial metering system produces acceptable exposures and little-noticed changes in depth of focus as the speaker moves and turns, reflecting more or less light. Although elements of the background grow darker and lighter with the aperture/shutter changes, those don’t unacceptably affect the portrait.

Dappled light and portraits where the face is in shadow but the body in bright sun call for flash fill-in. Modern cameras allow flash exposures at high speeds, a wondrous benefit over conventional cameras whose flash synchronization demands 1/60 second exposures. In bright light at 1/60 second, many lenses will not have small enough apertures to produce good results without also dropping the ISO value—the camera’s sensitivity to light. Digital cameras automatically adjust ISO at the photographer’s option. In bright light, that’s not much of an issue. Lower ISO images come with Kodachrome richness. I hold my ISO at 800 whenever practical for more consistent appearance.

Flash is not a panacea but today artificial light saves some otherwise too dark/too bright portraits. The images of Vicky Vertiz and Kenji Liu would have been too dark in the shade, or washed out in the light, except for the fill-in. Liu’s light plaid washes out despite the flash, Vertiz’ polka dots just barely survive but detail on her neck whites out. Alex Hohmann’s bright orange dress in full light, and wonderfully expressive face in open shade, would have confused the heck out of the camera’s brain. Hohmann’s skin tones render beautifully and her eyes sparkle owing to the balancing effect of flash fill-in.


“Para la tierra” offered a fabulous floricanto that deserves a hearing and re-hearing. My gosh, I would love to read those pieces I could hear only in the moment and then they were gone.

Oscar Duardo, guardian of the garden, videoed the performances. Hopefully the microphone picked up with clarity and one day the readings will be sharable with others. Possibilities abound with modern technology, especially inexpensive remote microphones. If sponsors and poets want to put themselves through the hassle of donning and doffing the tiny devices and bulkier battery pack transmitters, video and mic’ing artists offers freedom from time and place. As my grandfather used to say when faced with life’s possibilities, “mmn, a ver.” 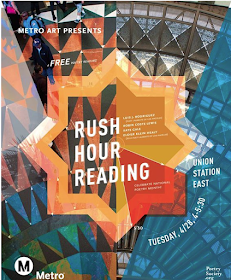 Today, Tuesday! Rush Hour Reading by Los Angeles-based poets in celebration of National Poetry Month! Come for the poetry and mingle with the poets afterwards. Rush Hour has never been so inspiring!

Be there, or be square. Levi's and Capri's welcome.

La Bloga friend Jesus Treviño is among the hardest-working documentarians in Aztlán. Latinopia, Treviño's wondrous public service on the internet, shares videos and essays on historical subjects, cooking, literature, zombies, and the continuation of the adventures of Arnie and Porfi, a cartoon series Sergio Hernández launched in the iconic raza magazine Con Safos.

May Update and Looking Even Forwarder 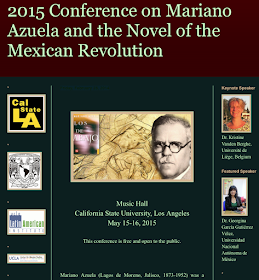 CSULA (Cal State El Sereno) professor, and La Bloga friend, Roberto Cantu, looks forward to next month and welcoming visitors to a popular celebration and scholarly conference on the work of Mariano Azuela and novels of the Mexican revolución. The Conference comes to the eastside of Los Angeles in May. Except for parking and no-host lunch, the conference is free.

Looking forward to 2016’s iteration of the conference, Cantu announces a call for proposals—abstracts that will be collocated to form panels—concerning the work of Americo Paredes.

Américo Paredes belonged to a generation of Mexican American writers that included Fabiola Cabeza de Baca (New Mexico, 1894-1991), Ernesto Galarza (México, 1905-1984), José Antonio Villarreal (California, 1924-2010) and, among others, Mario Suárez (Arizona, 1925–1998), writers who served their country as educators, labor organizers, journalists, and oftentimes as soldiers during the Second World War. Conference organizers welcome papers that spotlight the work of these Mexican American writers with an emphasis on their autobiographies (Cabeza de Baca, Galarza), or on their narrative fiction (Suárez, Villarreal) in relation to border narratives, the frontier experience, the relocation of home, and the way Mexican American culture is represented in such works, namely: as one that continues to grow out of the tension between tradition and modernity. Other proposed areas of study are the critical examination of scholarly works on the corrido, such as María Herrera-Sobek's The Mexican Corrido: A Feminist Analysis (1990), and Northward Bound: The Mexican Immigrant Experience in Ballad and Song (1993); or on Paredes's life and work, for instance José Limόn’s Américo Paredes: Culture and Critique (2013); Ramόn Saldívar’s The Borderlands of Culture: Américo Paredes and the Transnational Imaginary (2006); José R. Lόpez Morín’s The Legacy of Américo Paredes (2006); and Manuel Medrano’s Américo Paredes: In His Own Words, an Authorized Biography (2010).

The deadline for a 250-word abstract is February 14, 2016. The submitted abstracts can be in Spanish or in English. Submissions will be peer-reviewed and their acceptance or rejection will be communicated by e-mail on or before February 21.  Send abstracts to rcantu@calstatela.edu.

¡Gente! ¡Scholars! Dust off your guitar and begin practicing a couple of corridos.


Los Angeles Theatre Center Has A Seat With Your Name On It.

LATC's new season presents a diverse array of work, with artists from Los Angeles, Riverside, Chicago, and Spain. The stories on display include topics capturing the popular imagination such as women and sex; "machismo," and what makes a man; the challenges of interfaith romance; the use of deadly force by police; and the power of love against the effects of Alzheimer's.

Cultures from around the globe make contact this spring at LATC. You should too, according to LATC's website.

LATC's East of Broadway Spring Season kicks-off with Teatro Luna, as they bare it all without blushing in Generation Sex (April 17-May17), and Dreamscape's (April 16-May 17) reimagination of 1998 police-involved shooting in Riverside. 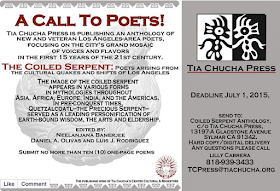 Back by community demand, Mega Corazon will return on Thursday, April 30—the closing day of National Poetry Month!


Conjunto Fest Growing Faster Than You Can Say Juan Tejeda 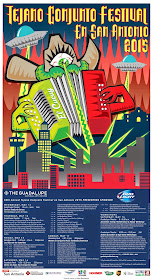 From La Bloga friend Juan Tejeda:
Familia, Camaradas and Colleagues, just wanted to personally invite you and your familia to the Guadalupe Cultural Arts Center's 34th Annual Tejano Conjunto Festival en San Antonio 2015 which will take place from May 13-17 at the Guadalupe Theater and Rosedale Park. Check out the complete schedule and musical line-up in the attached official poster of this year's Tejano Conjunto Festival, with the wild award-winning design by John Medina. Hope to see you here in San Anto in three weeks to witness the cucuy accordion invasion. Por favor spread the palabra and the poster. Gracias. Juan

Is Your Community Event Not Mentioned in La Bloga News & Notes?

Órale, it's not that we're stuck up. More likely, La Bloga hasn't been notified! Not that it's your fault or nothing, sabes, but marketing and outreach are the keys to getting La Bloga to soma pa'ca.