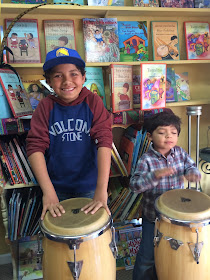 Mahcic and his brother playing the congas

Luna's Press is a bookstore on Mission Street that is run by Jorge Argueta. Named after his daughter, Luna, it has been host to authors whose books are sold there.  Luna Press has been part of us ever since it opened because of Jorge Argueta, the owner.  Jorge has been a friend since…well, I don’t actually remember. But it’s definitely been a long time.  I remember the time Jorge had an event for his book, Guacamole, at the restaurant, Sunrise, and it was very interactive because he asked for volunteers for the demonstration of preparing guacamole. It was a public space, and that made me happy because it represents the community we have here.  He also visited my 4th grade classroom, and all my friends were so happy and surprised that he was there. He did an activity in my classroom with corn kernels and beans.  He made it rain in the room!  There have also been events with some really cool authors like Yuyi Morales and Duncan Tonatiuh at the bookstore.  Yuyi Morales read Niño, a book about a sort of Lucha Libre champion who can only be defeated by las hermanitas.  She was very interactive at her reading, and she made the audience cheer “¡Niño!” every time he beat someone in the book.  Later on, we made luchador masks of the characters in the book. Duncan Tonatiuh read many books, one being Pancho Rabbit and the Coyote, a story about Pancho’s journey to find his papá in the carrot and lettuce fields, and Separate is Never Equal, a story about the fight that Sylvia’s parents put up just to get her into a segregated school.  Recently, there was a reading with René Colato Laínez, which is where we are here in this picture.  He was also at the Flor y Canto last year when Jorge invited me to read at El Tecolote.  René read the books Señor Pancho had a Rancho and The Tooth Fairy meets Ratoncíto Peréz.  He connected two different cultures in each book, different beliefs, and made them interact and intertwine.   I was honored to be at the Flor y Canto for the second time, the first one being at C.C.M., the Children’s Creativity Museum.  Reading at a Flor y Canto was a good experience for me.

This Is How It Is
by Mahcic Riley Hernández

I’ll be walking down the street with a straight brimmed hat
And people will look at me and get scared or whisper
Among each other talking mess about me just because of
The way I groove and the way I move,
I’ll be at The Chronicle, telling them to put this in the news,
“News Flash, we are human,” or
“Go back to where you came from, Techies!”
But they say no cause we say yes,
Apparently, we are invisible, ignored,
We were cool with it, but not anymore.
We have suffered through our struggle, put in jail, our
Houses bombed, hit with teargas,
And yet we say “Bring it on!”
But they haven’t stopped


Not after M.L.K had a dream,
Not after Che fought in the revolution,
Not after César Chávez fought for farm worker’s rights
Not after our generation, fighting for
Evictions, police brutality, and just putting up with society
So the family tree of freedom fighters keeps growing
Which is where those that don’t give up sprout
And those that believe sprout
And where I sprout.

Mahcic Riley-Hernández is ten years old and will be attending middle school in the fall. He plays guitar and baseball, and is a Mission native. He has read poetry at Flor y  Canto events for Luna Press, El Tecolote Newspaper, and San Francisco’s Poet Laureate, Alejandro Murguía. He is an artist in the making, and his parents are his inspiration. He also likes all Latin American cuisine. 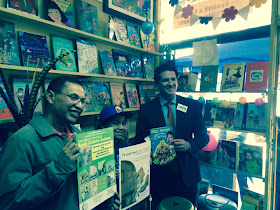