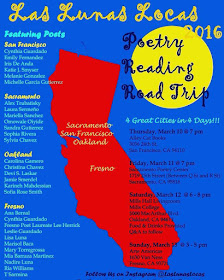 Billing themselves as Las Lunas Locas, thirty women from Los Angeles begin a caravan Thursday, driving from Los Angeles to San Francisco to launch a four-city poetry tour with readings also in Sacramento, Oakland, and Fresno.

Save the date! If you're in the neighborhood, the readings will offer memorable work in a unique peripatetic ambiente.

Six of the women held a fund raiser in El Sereno's popular Holy Grounds Coffee and Tea shop. What a genuine delight to see old friends and enjoy sparkling conversation with gente I've heard read at Avenue 50 Studio, and meeting others for the first time. The conversation and amistad were free. For a donation, a poet would create a poem on a now-ancient manual typewriter. 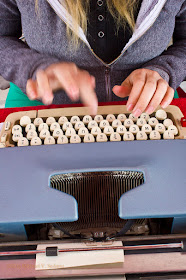 Organizer Karineh Mahdessian had asked if I wanted a formalist work. I'd raised the formalist issue at a free verse-dominated La Palabra reading the previous week. I answered not exactly; I wanted something "in the style of Jesus" in as much as we were standing on Holy Grounds.

Melanie González was at the machine and took my offhand remark as a prompt. She rolled a sheet into the platen and began composing on-the-fly. Using mostly two fingers and striking the keys hard  like a percussion instrument until the fingers began to bleed a bit, almost, Melanie worked swiftly and confidently.

Iris de Anda's typing machine misbehaved and didn't move the inked ribbon. Melanie pulled the poem off the machine and read it aloud before presenting it to me. I complained I couldn't read the wondrous work. Iris checked it out then rendered the machine first aid.

Melanie rolled the paper back into the machine and re-typed the poem on the original document. I got two gems for the small donation. The palimpsest contains the faint impressions of the original running vertically, with the final edition reading top-to-bottom. 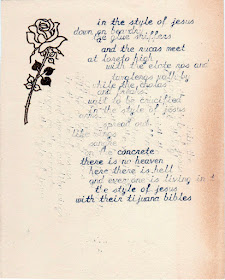 I am saving this wonderful piece in my collection of libros cartoneros. Next time Las Lunas Locas hold another fund-raiser, I'm taking more money. These poets are founts of creativity and energy and are certain to create masterpiece after masterpiece, sparkling gems like the poets themselves.

Gente in Northern California and the central valley metropolis of Fresno can look forward to hearing Melanie at selected venues, or Karineh, or Iris, or one of the six spirits working the fundraiser. For sure, audiences will totally dig some combination of the thirty making the week-long caravan in the service of poetry and the Muse. 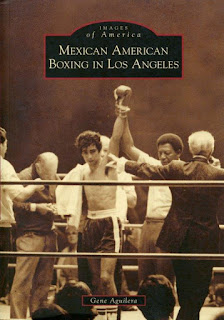 Photos capture epic ring battles but also offer candid snap shots of boxers, some very well known, others a revelation to the casual boxing fan, as well as interesting tidbits about their personal lives.

Captions, some of them quite deep, not only indicate the records of renowned champions Mando Ramos, Danny Little Red  Lopez, Carlos Palomino, Oscar De La Hoya, Raul Rojas, Genaro Chicanito Hernandez, and Bobby Chacon, but also provide interesting details about their careers and lives, as well as those of celebrated contenders Enrique Bolaños, Art Aragon, Armando Muñiz, Ernie Indian Red Lopez and Ignacio Keeny Teran, revealing the demons and circumstances that denied them the titles their skills in the ring merited.

Beginning at Jack Doyle’s Vernon Arena at 38th and Santa Fe in the 30s, Cal Working’s Hollywood Legion Stadium and Wrigley Field in the 40s, the neighborhood rivalries and international duels of these light weight warriors moved on to the fabled Olympic Auditorium at 18th and Grand, the LA Sports Arena, The Fabulous Forum, plus Las Vegas and to other continents with brilliant smaller weight champions and contenders.

Garcia is currently working on his first novel Hueso, about Spanish language media, immigration, and police abuse. The novel''s action moves from Cd. Juarez to Los Angeles at the height of the narco wars. 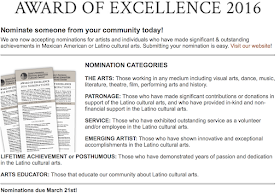 Who has not read a list of notable raza and wondered who picked them, or why so-and-so was omitted? Austin, Texas' The Emma S. Barrientos Mexican American Cultural Center invites everyone to get into the process of naming 2016 outstanding raza creators of the cultural arts for the Austin region of the country.

The centro announces six categories are open for nomination, including self-nomination"

THE ARTS: Those working in any medium including visual arts, dance, music, literature, theatre, film, performing arts and history.

SERVICE: Those who have exhibited outstanding service as a volunteer and/or employee in the Latino cultural arts.

EMERGING ARTIST: Those who have shown innovative and exceptional accomplishments in the Latino cultural arts.

LIFETIME ACHIEVEMENT or POSTHUMOUS: Those who have demonstrated years of passion and dedication in the Latino cultural arts.

ARTS EDUCATOR: Those that educate our community about Latino cultural arts.

Read the award descriptions, criteria and eligibility requirements, and download the nomination form, at the ESB-MACC website.