One of the more enduring poetry facts in Southern California is if it is the 4th Sunday of the month, La Palabra Poetry Series is convening at Avenue 50 Studio at 2:00 p.m.

Now in its thirteenth year, La Palabra is hosted by Karineh Mahdessian, the indefatigable poetry impresaria, as tireless as she is enthusiastic.

The poetry circle welcomes an Open Mic and wraps up with a Q&A sometime around 4:00 p.m. The always amicable audience enjoys not only the camaraderie but also being surrounded by the month's exhibition in the active art gallery, one of Highland Park's longest-lived survivors of increasing gentrification. This month's main gallery walls feature the work of Sonia Romero, in a show reflecting Romero's public persona, Public Artist: The Works of Sonia Romero with photography by Rafael Cardenas. 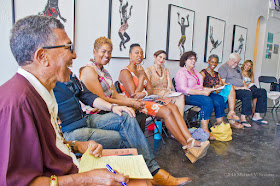 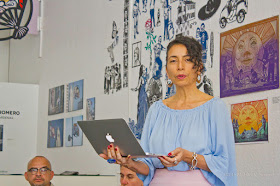 La Bloga was unable to secure a poem from María Elena Fernández. La Bloga deeply regrets the omission of the engaging work Fernández shared. There's a lesson in this: begin earlier and follow up right away.

Poetry, however, is not the exclusive métier of La Palabra readers. Novelists, short fiction writers, essayists, guitarists, all have shared the floor over the years.

For example, today's first selection is a mother's heart-broken essay recounting one of the worst experiences a parent can go through, a child's drug addiction and the extraordinary steps in the child's and parent's recovery process.

I told him he couldn’t live with me anymore; I could not protect him from this disease. I told him “I love you beyond everything” like the children’s book we once read over and over again, “Guess How Much I Love You.”

“But you know I can’t keep you alive here,” I said as we held each other tightly.

It felt like the most loving moment that we’d had in years. We understood each other perfectly, even though I felt as if the most vital part of me was being savagely ripped away.

The mother of a young man who was with Raphael in another treatment center had called me repeatedly over the previous months, urging me to look at New Life House, where her son was now staying. I decided to visit. I spoke with some of the young men there who told me how much fear they had lived with all their lives, and how living and working together, they had found the strength and peace to live a different, sober, life. This place looked like home; the tight structure and long-term program seemed to provide the scaffolding these young men needed, along with a community of “brothers” — something my son had craved.

I went to see Raphael at the thirty-day treatment center, and he (gratefully) chose to go to New Life House. I wanted to imagine him staying there the full eighteen months; they only asked him to try it out for three. It’s not easy being in “the House,” as everyone calls it; no one is allowed to just vegetate. Not everyone makes it.

During the first months he was there, though sober, he struggled with being fully present, honest, and participating in the program. He slept behind dark glasses, pretending he was studying. I was told that perhaps he needed more serious consequences like incarceration or homelessness, something no mom would want to have happen to her son. But then another month passed, and he began to cross over to a new level of willingness — desire — to make real change. He finished his schoolwork for graduation a full month before the ceremony.

Over the last six months since my son left home, I’ve tried to figure out what I like to eat, what music I like to hear. My iTunes, refrigerator, and everything else revolved around my son. I hadn’t lived alone for many years. Knowing I would have to look at my own demons at some point, I stayed busy. Then I began to catch up on sleep.

My therapist asked, “What are you doing besides Al-Anon, work and visiting your son? Try stand up comedy or improv; you’re funny!”

I signed up for a stand-up class. At the end of the series, we had to do a set at the Comedy Store in West Hollywood. It was a packed Sunday night, but I only invited a few friends. I was a bit terrified. I’d been promised by our instructor, a stand-up comedian, that once I went up on stage, nothing else in my life would be as scary or difficult, and I needed that. It was dark. People were stoked and nervous in the green room.

“So my son just left home recently — it was a really hard choice — Harvard, Yale or … the last house on the block, the young men’s recovery house,” I said during my first set. “Yup, he’s doing his gap year studying addiction.”

Lots of laughs. I got asked back to do another set but declined. Our instructor was right, though: I did feel different — fearless — for a moment.

I woke up the day after my set feeling like shit. I had “outed” my son as an addict! But my son had given me the go-ahead to write about him, about us, about addiction. And maybe some other family would benefit.


Three weeks later, I’m at his graduation. Today, June, 18, 2014, is joyful, as Raphael walks down the field to be handed his diploma, and I sit in the stands with family. Later we celebrate at his recovery house and at the bowling alley with all his “brothers” and their families. No drunken grad night.
After so many years of micromanaging, advocating and screaming — homework ruling our lives, pleading with teachers to understand my dreamy, intellectual, creative (distracted, unfocused, disorganized) beautiful son, he is graduating. He did this with the support of the twenty-four other young men in the house — without me standing over him. The next step will be to get a job, and eventually, if he “stays the course,” move out with a few of the other young men from the house. And maybe college and beyond. But I am only looking at today.

“I love the way you are so happy about your son’s high school graduation,” a friend tells me. “For most other kids it’s just a step on the way to the next — it’s all about where they are going to college.” I am thrilled that he is graduating, but mostly I’m happy each time I see that he is alive. 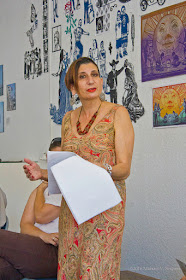 Carla Sameth is a writer based in Pasadena, California. Her work has been published in several anthologies and has appeared in online and print publications including Pasadena Weekly, La Bloga and Tikkun. She has helped others tell their stories as co-founder of The Pasadena Writing Project and president of iMinds PR.

He belongs to us.
That mad man
huddled in the doorway
with his broken teeth,
wild mouth, violent tongue.
Yelling out our secrets
against our wishes.

Pay him his ransom.
Long ago, drinking danger,
he swallowed our jagged shame.
Was electrocuted for our sins.
Rose again.
That’s worth something.

His last fiery moments
burn our faces & hands.
Hold him closely
as he dies
Even if we blister. 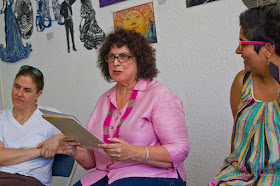 Ms. Cohen is a writer living in Los Angeles. Before leaving her thirty-five year career as an Arts Manager to pursue her own writing career, she  worked for prominent art organizations including, L.A. Theatre Works, as Managing Director and Director of their acclaimed Arts and  Children’s Project. She is currently Co/Director of The Pasadena Writing Project. She has been published in anthologies including; “Bringing the Soul Back Home”, and “The Spirit of Place”, and online “Hometown Pasadena”. She has read poetry and prose in places such as, Santa Monica Library, Pasadena Library, Ave 50 Studio,  The Carriage House, and L.A./ LitCrawl2015 .

Mothers watch daughters who listen with their eyes

whose voices bloom   they flower between rain drops

weave their lives inside dreams 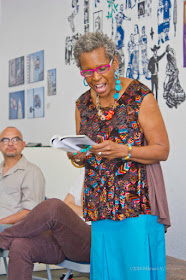 Gerda GOVINE ITUARTE published two books of poetry, Oh, Where is My Candle Hat? and Alterations | Thread Light Through Eye of Storm.

She is CEO of G. Govine Consulting working with the public and private sector, educational institutions and artists specializing in diversity and inclusion as an expert witness, litigation consultant, facilitator, writer and public speaker based in Pasadena, CA.