Things have been apocalyptic for a long time. How long can it go on? Forever? Maybe there’s something to the idea of cyclical time after all. What goes around . . .

So, what do I read to take my mind off the newsfeed of doom? I keep a bloodshot eye for demented stuff like Mayan Calendar Girls: The Great Meso-American Novel by Linton Robinson, Grayson Moran, Cammy May Hunnicutt, and “Team 2012”.

Yes, it’s an oldie, from an earlier part of the 21st century when 2012 was still the future. Barack Obama, Dubya Bush, and Francis Ford Coppola do cameos. Ghosts of apocalypses past, riding again

Those suburban mystics who wonder what ever happened to the “Mayans,” while not recognizing who’s mowing their lawns and vacuuming their floors, will be seriously disturbed by this one. It's not just a Great Meso-American Novel, but a masterpiece of Mayasploitation, with plenty of sex (more than violence that should be preferable in a civilized world), drugs, and spirituality of a kind you can't find neatly packaged at Barnes & Noble. 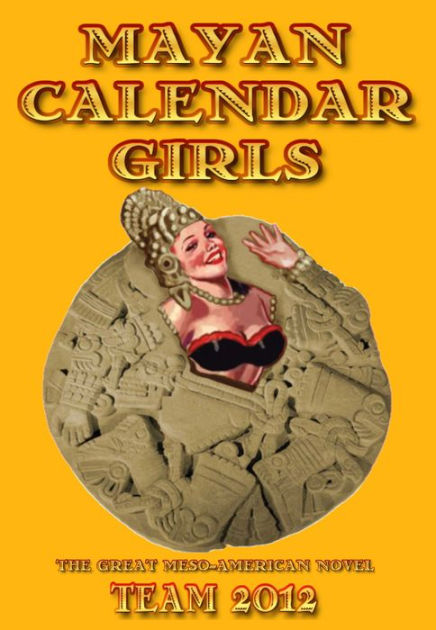 And it's not just the result of intense navel-staring on the parts of authors. Having been to the Yucatan, I can attest that the stranger than sci-fi stuff (yes, human/dolphin sex is a thing) that brims over on every action-packed page, in places where James Bond and Indiana Jones would fear to tread is, yeah, actually real. And just how will Mayan culture affect 21st century civilization? Probably like this, only more so . . .

I unashamedly enjoyed it, and by the way, I don’t believe there’s such thing as a guilty pleasure. Damn the pretensions, just enjoy stuff.

My visit to Mayalandia, back before it was upgraded to the Mayan Riviera, blew my mind. My dad telling me about how when you go down south enough, the Mexican deserts give way to jungles didn’t prepare me for it. Suddenly, the tamales are wrapped in banana leaves instead of corn husks, the street names are all Mayan, and the little brown people half my size made me feel like I wasn’t in Aztlán anymore . . .

The same feeling comes back when I read this dizzying tsunami of weird details so dense it gets difficult to tell who’s doing what to whom, but then that just may be the point.

Strangely enough, it was originally an internet serial, like my own Brainpan Fallout. The cliffhanger style fits when things are fluxed up.

And it holds up amid the current global madness. Another decade, another apocalypse. New possibilities emerge in a shattered world.

Again, it gets me wondering about the Mayan influence on the future. Are they really the new Egyptians? Who will be appropriated? Who will consume? And who will be consumed? Are we products yet? Maybe I’ll finally get to use my idea about one day all the interwebs spontaneously translating into Mayan hieroglyphics . . .

Ernest Hogan is the Father of Chicano Science Fiction, and is just now learning what that means.