The Spring 2022 Catalog of the University of Arizona Press features several titles that should be of interest to readers of La Bloga.  Take a gander. 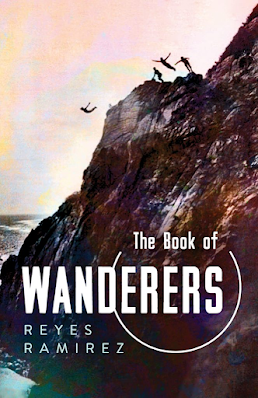 The Book of Wanderers
Reyes Ramirez
February
[from the catalog]
What do a family of luchadores, a teen on the run, a rideshare driver, a lucid dreamer, a migrant worker in space, a mecha soldier, and a zombie-and-neoNazi fighter have in common?
Reyes Ramirez’s dynamic short story collection follows new lineages of Mexican and Salvadoran diasporas traversing life in Houston, across borders, and even on Mars. Themes of wandering weave throughout each story, bringing feelings of unease and liberation as characters navigate cultural, physical, and psychological separation and loss from one generation to the next in a tumultuous nation.
The Book of Wanderers deeply explores Houston, a Gulf Coast metropolis that incorporates Southern, Western, and Southwestern identities near the borderlands with a connection to the cosmos. As such, each story becomes increasingly further removed from our lived reality, engaging numerous genres from emotionally touching realist fiction to action-packed speculative fiction, as well as hallucinatory realism, magical realism, noir, and science fiction.
Fascinating characters and unexpected plots unpack what it means to be Latinx in contemporary—and perhaps future—America. The characters work, love, struggle, and never stop trying to control their reality. They dream of building communities and finding peace. How can they succeed if they must constantly leave one place for another? In a nation that demands assimilation, how can they define themselves when they have to start anew with each generation? The characters in The Book of Wanderers create their own lineages, philosophies for life, and markers for their humanity at the cost of home. So they remain wanderers . . . for now.
REYES RAMIREZ , a Houstonian of Mexican and Salvadoran descent, is a 2020 CantoMundo Fellow and has received grants from YES Contemporary, the Houston Arts Alliance, and the Warhol Foundation’s Idea Fund. Read more of his work at reyesvramirez.com.
__________________ 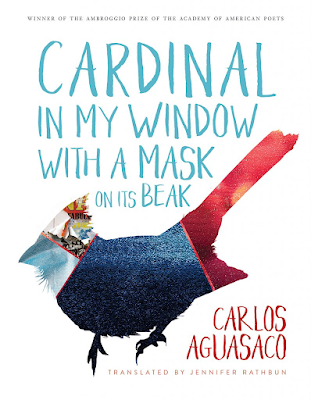 [from the catalog]
Winner of the 2021 Ambroggio Prize of the Academy of American Poets
Cardinal in My Window with a Mask on Its Beak takes readers on a journey through poetic portraits, exploring the lives of passionate social justice advocates and historical migrants such as Ota Benga, Sarah Baartman, Isidro Marcelino Orbés, César Vallejo, and Gertrude Stein, among others. Raw and unapologetic, the poems in this bilingual collection ask readers to question their role in today’s society. The verses press the reader to examine what it means to have social justice in our globalized world, as Aguasaco confronts how society treats the Other—be that the immigrant, the Indigenous person, or anyone who embodies Otherness.
A first-generation immigrant to the United States, Aguasaco embraces his transborder/transnational/intercultural identity by building a bridge across time and distance to unite the great voices of the Renaissance with his lyrical poems. The collection offers bold and fascinating dialogue with Spanish authors such as Juan Boscán, Francisco de Quevedo, Garcilaso de la Vega, and Sor Juana Inés de la Cruz. The poems examine the fundamental liberties inherent to humanity through stunning verse. In a quest for freedom, the poems openly criticize the treatment of immigrants in the United States, drawing poignant parallels with human rights abuses throughout history.
Cardinal in My Window with a Mask on Its Beak brings potent voices of the past to life in poems that critically examine the present and future of the human experience.
CARLOS AGUASACO is a professor of Latin American cultural studies and chair of the Department of Interdisciplinary Arts and Sciences at the City College of New York (CUNY). His most recent poetry book is The New York City Subway Poems.
JENNIFER RATHBUN , a professor of Spanish and chair of the Department of Modern Languages and Classics at Ball State University, has published sixteen books of poetry in translation; two anthologies of poetry; and the poetry collection The Book of Betrayals. Rathbun completed her PhD at the University of Arizona.
_________________ 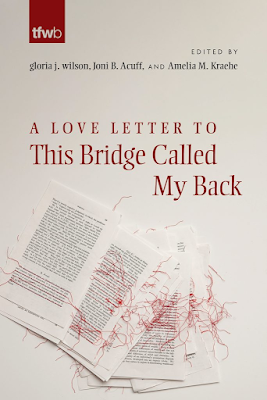 A Love Letter to This Bridge Called My Back
Edited by Gloria J. Wilson, Joni B. Acuff, and Amelia M. Kraehe
April

[from the catalog]
In 1981, Chicana feminist intellectuals Cherríe Moraga and Gloria Anzaldúa published what would become a touchstone work for generations of feminist women of color—the seminal This Bridge Called My Back: Writings by Radical Women of Color. To celebrate and honor this important work, editors gloria j. wilson, Joni B. Acuff, and Amelia M. Kraehe offer new generations A Love Letter to This Bridge Called My Back.
In A Love Letter, creators illuminate, question, and respond to current politics, progressive struggles, transformations, acts of resistance, and solidarity, while also offering readers a space for renewal and healing. The central theme of the original Bridge is honored, exposing the lived realities of women of color at the intersections of race, class, gender, ethnicity, and sexuality, advancing those early conversations on what it means to be Third World feminist conscious.
A Love Letter recognizes the challenges faced by women of color in a twenty-first-century world of climate and economic crises, increasing gun violence, and ever-changing social media constructs for women of color. It also retains the clarion call Bridge set in motion, as Moraga wrote: “A theory in the flesh means one where the physical realities of our lives—our skin color, the land or concrete we grew up on, our sexual longing—all fuse to create a politic born of necessity.”
GLORIA J. WILSON is co-founder and co-director of Racial Justice Studio and an assistant professor in the School of Art at the University of Arizona. Her research centers cultural studies and Black studies engagements with theories of racial formations, anti-racism, and critical arts-based praxis.
JONI B. ACUFF is an associate professor in the Department of Arts Administration, Education, and Policy at The Ohio State University. Acuff utilizes frameworks such as critical race theory, critical multiculturalism, Black feminist theory, and Afrofuturism to develop and disseminate pedagogical and curriculum strategies that activate critical race knowledge in art education.
AMELIA M. KRAEHE is associate vice president for equity in the arts, co-founder and co-director of Racial Justice Studio, and an associate professor in the School of Art at the University of Arizona. She researches and teaches about intersectional anti-racism, the arts, and creative agency. She is co-author of Race and Art Education and co-editor of Pedagogies in the Flesh: Case Studies on the Embodiment of Sociocultural Differences in Education and The Palgrave Handbook on Race and the Arts in Education.
_________________ 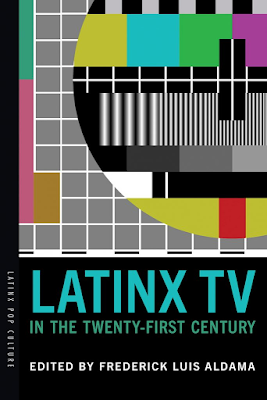 [from the catalog]
Latinx TV in the Twenty-First Century offers an expansive and critical look at contemporary television by and about U.S. Latinx communities. This volume is comprehensive in its coverage while diving into detailed and specific examples as it navigates the complex and ever-changing world of Latinx representation and creation in television.
In this volume, editor Frederick Luis Aldama brings together leading experts who show how Latinx TV is shaped by historical, social, cultural, regional, and global contexts. Contributors address head on harmful stereotypes in Latinx representation while giving key insights to a positive path forward. TV narratives by and about Latinx people exist across all genres. In this century, we see Latinx people in sitcoms, sci-fi, noir, soap operas, rom-coms, food shows, dramas, action-adventure, and more. Latinx people appear in television across all formats, from quick webisodes, to serialized big-arc narratives, to animation and everything in between. The diverse array of contributors to this volume delve into this rich landscape of Latinx TV from 2000 to today, spanning the ever-widening range of genres and platforms.
Latinx TV in the Twenty-First Century argues that Latinx TV is not just television—it’s an entire movement. Digital spaces and streaming platforms today have allowed for Latinx representation on TV that speaks to Latinx people and non-Latinx people alike, bringing rich and varied Latinx cultures into mainstream television and addressing urbanization, immigration, family life, language, politics, gender, sexuality, class, race, and ethnicity.
Once heavily underrepresented and harmfully stereotypical, Latinx representation on TV is beginning to give careful nuance to regional, communal, and familial experiences among U.S. Latinx people. This volume unpacks the negative implications of older representation and celebrates the progress of new representation, recognizing that television has come a long way, but there is still a lot of important work to do for truly diverse and inclusive representation.
FREDERICK LUIS ALDAMA is the Jacob & Frances Sanger Mossiker Chair in the Humanities and Affiliate Faculty in the Department of Radio-Television Film at the University of Texas at Austin, as well as Adjunct Professor and Distinguished University Professor at The Ohio State University. He is the award-winning author of more than forty-eight books and founder and director of UT Austin’s Latinx Pop Lab.
___________________ 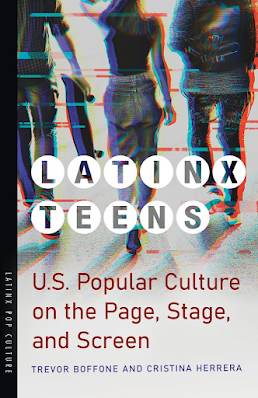 Latinx Teens :  U.S. Popular Culture on the Page, Stage, and Screen
Trevor Boffone and Cristina Herrera
April
[from the catalog]
What can Latinx youth contribute to critical conversations on culture, politics, identity, and representation? Latinx Teens answers this question and more by offering an energetic, in-depth look at how Latinx teenagers influence twenty-first-century U.S. popular culture.
In this exciting new book, Trevor Boffone and Cristina Herrera explore the diverse ways that contemporary mainstream film, television, theater, and young adult literature invokes, constructs, and interprets adolescent Latinidad. Latinx Teens shows how coming-of-age Latinx representation is performed in mainstream media, and how U.S. audiences consume Latinx characters and stories. Despite the challenges that the Latinx community face in both real and fictional settings, Latinx teens in pop culture forge spaces that institutionalize Latinidad. Teen characters make Latinx adolescence mainstream and situate teen characters as both in and outside their Latinx communities and U.S. mainstream culture, conveying the complexities of “fitting in,” and refusing to fit in all at the same time.
Fictional teens such as Spider-Man’s Miles Morales, I Am Not Your Perfect Mexican Daughter’s Julia Reyes, Party of Five’s Acosta siblings, and In the Heights’s Nina Rosario comprise a growing body of pop culture media that portray young Latinxs as three-dimensional individuals who have agency, authenticity, and serious charisma. Teenagers and young adults have always had the power to manifest social change, and this book acknowledges, celebrates, and investigates how Latinx teens in popular culture take on important current issues.
With a dynamic interdisciplinary approach, Latinx Teens explores how Latinxs on the cusp of adulthood challenge, transform, expand, and reimagine Latinx identities and their relationships to mainstream U.S. popular culture in the twenty-first century.
TREVOR BOFFONE is a lecturer in the Women’s, Gender & Sexuality Studies Program at the University of Houston. He is the author of Renegades: Digital Dance Cultures from Dubsmash to TikTok.
CRISTINA HERRERA is director of Chicano and Latino Studies at Portland State University, where she is a professor. She is the author of ChicaNerds in Chicana Young Adult Literature: Brown and Nerdy.
Later.
__________________
Manuel Ramos writes crime fiction. His latest novel is Angels in the Wind.
Manuel Ramos at 12:01 AM
Share